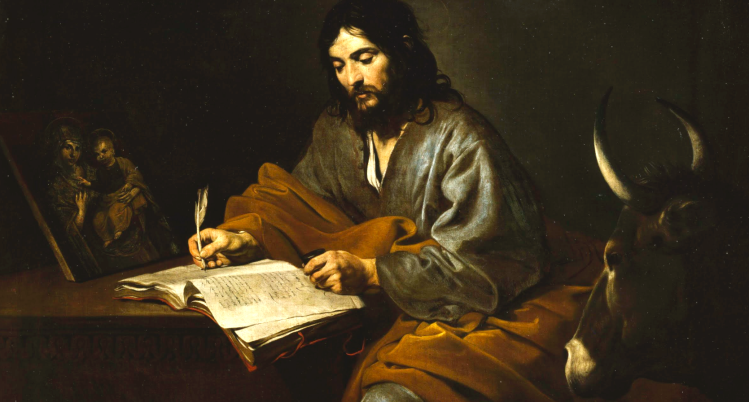 It’s been a while since I wrote anything about the Synoptic Problem, so I thought I would take a closer look at a well-known issue: Luke’s Great Omission.

It is almost universally recognized that Luke’s Gospel copies closely from Mark, rewriting (with various modifications) the great majority of Mark’s pericopes and keeping them generally in the same order. However, a disruption occurs after Mark’s story of the feeding of the five thousand, as Luke seemingly skips everything from Mark 6:45 to 8:26. Then, from 8:27 onward, Luke resumes his faithful copying of Mark. Scholars cheekily call this jump Luke’s “Great Omission” as a play on the words “Great Commission”.

END_OF_DOCUMENT_TOKEN_TO_BE_REPLACED

This article is a bit of a departure from what I usually write. It’s less about biblical studies, and more of a brief history lesson. I’ve always found the various references to “king Herod” and other Judaean rulers in the Gospels and Acts to be somewhat confusing — and, truth be told, the scheming Herodian royal family makes for a fascinating historical study. So read on if you’re interested in the Herodian dynasty and their place in history and scripture. (And if that doesn’t interest you, maybe the section on historical deaths by worms will.) For the purposes of this article, I will limit myself to individuals mentioned directly in the Bible.

In the process of doing this research, I also made a Herodian family tree for my own use. I share it below with the caveat that it is somewhat incomplete, especially where source references are concerned.

END_OF_DOCUMENT_TOKEN_TO_BE_REPLACED

Every Sunday, Christians around the world (and sometimes even in space) consume small amounts of bread and wine as part of an ancient ritual shared by nearly all denominations1, though the details and theological significance may vary. Catholic, Orthodox, and Anglican churches call this ceremony the Eucharist, from the Greek eucharistia, meaning “thanksgiving”. To Catholic and Orthodox believers, the bread and wine become the actual body and blood of Christ, and consuming them plays a direct role in the believer’s salvation. By contrast, evangelical Protestants (who are likely to use grape juice instead of wine) call the ritual “Communion” and see it as merely a symbolic remembrance of the crucifixion. Anglicans and traditional Protestants fall somewhere in between.

Even in the early years of Christianity, there was diversity in the ritual’s liturgy and symbolism. The traditional conception of the Eucharist as a rite taught by Jesus himself to the disciples, preserved in the New Testament, and transmitted faithfully from generation to generation runs into problems when the evidence is examined closely. In the past, scholarship naively assumed an over-simplified view of the ritual’s origins and the homogeneity of early Christian practices. (König 123) In the twenty-first century, however, the views of scholars have changed remarkably thanks in part to fruitful comparisons with the Greco-Roman practices of the early Christian era. END_OF_DOCUMENT_TOKEN_TO_BE_REPLACED

A few weeks ago, Stewart Felker wrote an article about what he suggests may be “the true most embarrassing verses in the Bible” — quoting a remark famously made by C.S. Lewis regarding Mark 13:30 (“This generation will not pass away until all these things have taken place”). What Felker has in mind, though, is a statement by Jesus about marriage and the afterlife found in Luke. In fact, when I first saw him mention it in an online discussion, I almost didn’t believe it was actually in the Bible.

The remark occurs in a well-known Synoptic pericope. To understand it, we should look at Mark’s version first. The context, chapter 12, is a loosely-connected series of sermons and other opportunities for Jesus to dispense wisdom. In vv. 18–27, some Sadducees, “who say there is no resurrection,” pose a trick question to Jesus, perhaps in the hopes of discrediting him and the Pharisaic belief in a resurrection.

The scenario they pose is one in which a widow ends up marrying seven brothers in succession due to the Mosaic law on levirate marriage. Since polyandry is not allowed in Judaism, these Sadducees demand to know which of the brothers would be married to her in the resurrection (afterlife). END_OF_DOCUMENT_TOKEN_TO_BE_REPLACED 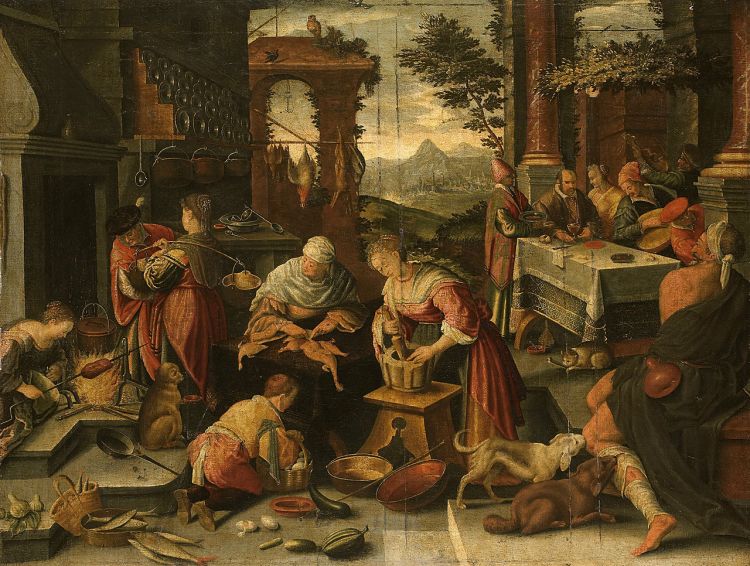 Luke’s parable of the Rich Man and Lazarus is remarkable for several reasons. It is the only Gospel parable in which a character is named. It seemingly has no parallel in the other Synoptics. It is often thought to be based on a pagan folktale. And it presents a view of the afterlife that is utterly unique in the Bible.

Figuring out the author’s intent with this parable has been a challenge, and many differing opinions have been offered. I’d like to look at some of the sources Luke may have drawn upon, and what message I think the parable is intended to convey. There are also some connections with the other Gospels that might get overlooked by most readers. END_OF_DOCUMENT_TOKEN_TO_BE_REPLACED

The nativity of Jesus is such a beloved tale, it’s hard to read it critically without feeling a twinge of guilt, as though I am betraying something sacred and magical in my desire to see where the story comes from and how it’s put together. And yet, it’s not the text itself I defy by scrutinizing the Bible, so much as the myth our culture has created in place of what the text actually says.

When I wrote about Matthew’s nativity story a year ago, I tried to emphasize that, despite its reverence for the Bible, Christianity shows remarkable disregard for the actual details as written. Whether we admit it or not, it is clear from our actions that we understand the Christmas story as a malleable, adaptable legend and not as a fixed historical event.

Purely by coincidence, the nearby preschool my two boys attend here in Japan is a Christian institution, and their annual Christmas recital always includes a nativity play, acted out by the oldest class. This year’s performance was a blend of the stories found in Matthew and Luke, with elements freely modified or omitted as the director saw fit. King Herod — played by my six-year-old, who wore a golden crown obviously modeled after the British crown jewels, Anglican cross included (what a wonderful anachronism!) — heard about the messiah’s birth before the magi ever arrived. No slaughter of innocents was shown, and the family of Jesus had no need to flee to Egypt. The angels sang, and everyone lived happily ever after.

Of course, the Bible tells no story resembling this or any other church nativity play I’ve ever seen. Matthew’s story of the star, the magi, and the flight to Egypt is entirely different from Luke’s tale, which I’m looking at in detail today. Once again, I am indebted to the writings of David Friedrich Strauss — one of the first Protestant theologians to read the Gospels critically — and the renowned Catholic scholar Raymond E. Brown. END_OF_DOCUMENT_TOKEN_TO_BE_REPLACED

It’s time for another look at the Synoptic Problem. This time I’m interested in a very well-known piece of text called the Lord’s Prayer or Pater Noster, which is how it begins in the liturgical Latin version.

Recitation of the Lord’s Prayer from the King James Bible was a daily ritual at my childhood school, so it is something I know by heart like perhaps the majority of Christians over the past two thousand years. It is precisely this familiarity that makes the textual development of the prayer difficult to analyze, since scribes had a strong tendency to correct the version in front of them with the version they knew from memory. Thus, the version we find in Luke 11 of the late Greek Textus Receptus — and in English versions that are based on this text, like the King James — is nearly identical to that found in Matthew 6. But it was not always so. END_OF_DOCUMENT_TOKEN_TO_BE_REPLACED

In this article, we delve further yet into the murky depths of the Synoptic Problem, and a new actor appears on the stage: an ancient work known as the Didache, or The Teaching of the Apostles. (The name is usually pronounced “did-a-key”.) This was an ancient document that contained both ethical teachings and instructions for conducting church, and it may well date as early as the first century. Strangely, its relevance to the Synoptic Problem has been mostly overlooked until recently. END_OF_DOCUMENT_TOKEN_TO_BE_REPLACED

In my second article on the subject, I looked at the Parable of the Talents/Minas, which is found in Matthew and Luke, but not in Mark. Under the standard two-source theory, the source of such material is a hypothetical document called Q. According to noted Q skeptic Mark Goodacre, Luke copied that parable and other double tradition passages from Matthew. My own analysis suggests a third solution supported by a small but increasing number of scholars: that Matthew copied Luke — to be precise, an earlier version of Luke we can call proto-Luke. We’ll call this view “Matthean Posteriority” for convenience.¹  END_OF_DOCUMENT_TOKEN_TO_BE_REPLACED

I recently wrote an article on the Synoptic Problem and how editorial fatigue — consistency errors made by one writer who is copying another — is a key type of evidence showing that both Matthew and Luke were based on Mark. If you don’t know what the Synoptic Problem is, you should go read that article before this one.

Did Luke get this material from Matthew? Did Matthew get it from Luke? Both possibilities seem unlikely for a number of reasons; for one, Matthew and Luke differ drastically on key stories not found in Mark, like Jesus’ nativity and the resurrection appearances. If, for example, the author of Luke knew Matthew, why did he completely reject great story material like the adoration of the Magi and the flight to Egypt? Why provide a genealogy completely different from Matthew’s? And so on. END_OF_DOCUMENT_TOKEN_TO_BE_REPLACED

Check out my Amazon Affiliates Store to see some of the Bible-related books I recommend. I also receive a small commission from sales made through Amazon links on this website.